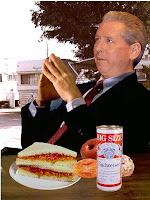 First, I cannot claim credit for having written the article titled, “Unfortunate Son,” the Stand Off Article of the Year Award winner of 2005. I had never read the article until recently, in fact, until Schwarz posted a comment on Nolan Chart. But then I contacted Gina di Miranda who did write the article and during our catching -up chat she reminded me that Schwarz knew perfectly well she was investigating him. Gina had been carrying out ordinary due diligence as Schwarz began his presidential campaign when the facts began to shock her. Gina was working on his campaign, paid only for some writing and doing great work. Schwarz gave Gina his driver's license number, when asked. Now I cannot imagine what he was thinking. We had both been very clear about the need for absolute transparency. He must have known what she would find. Schwarz ignores the facts and tries to win through intimidation. This evidently works with some folks.

Gina won high praise for her masterful article, "Karl Schwarz:  Unfortunate Son," published on Indy Media.  The article was a tour de force in research, thorough and dispassionate.
Schwarz decided to run for president although he had no experience in politics and was hampered by a background that, if his campaign had ever been taken seriously, would have destroyed any pretensions. I regret that I am the individual who gave him the idea originally. Having tried to get Norman Schwarzkoph run to spoil the Bush win in 2004 I thought a third party run that included the 9/11 issue could be useful in getting those issues out.

Right then, before saying a word, I should have done the research later carried out by so well by Gina. I apologize. Schwarz had never been on the Republican National Committee. He knew no one of note who would serve as his Campaign Chairman. When I pressed him on this point he began to grow hostile. He told me he had a massive mailing list. This also proved to be an exaggeration.

He knew nothing about putting on even an effective campaign for dog catcher, much less a national campaign for president. When I realized this I was appalled. The campaign I designed for him was based on an intense Internet presence on the same lines as carried out by Joe Trippi, who designed the campaign for Howard Dean. Schwarz made a partial payment for the work I did. I have a copy of the check and can provide that. What you should notice is that the check is from Patmos Nanotechnology, not a campaign committee. I thought that highly irregular but everything about the Schwarz Campaign was odd. Schwarz employed me to run his campaign and I have considerable experience in politics, managing Libertarian campaigns from 1979 until I switched to Republican in 1988. After that I managed campaigns for Republicans.

Schwarz asked me to relocate to manage his office. We agreed on compensation and he was to rent housing and a separate campaign office with phone banks and other campaign necessities. Instead I found myself trying to run a campaign for president with a calling card from a small table in a bedroom in an apartment I had to share with him and my sons. As a computer I had only my laptop, not at all what was needed. Schwarz spent every afternoon golfing, carrying out a bag of clubs that was taller than him.

I was not sorry to stop working for him. I later learned the amusing facts about his campaign announcement from two of the three people who turned up for the event in Texas.

Schwarz's remarks about me and about my sons are libelous and demonstrably untrue. He attributes these outrageous stories to Morgan Gell. This does not surprise me. Morgan is well known in some circles for her sensationalist bent. That is why I insisted on proof when she told me unbelievable stories. But sometimes she does tell the truth and sometimes she provides interesting evidence, for instance Sex, Lies, and The Tape. Morgan is my biological daughter, born of my first marriage. Her birthday is July 5, 1967. But I did not raise her and she is not legally my daughter. If I die with any money it will go to support my son, Arthur who is seriously handicapped.

Morgan has always had issues. She was allowed to drop out of school in the 8th grade, cannot to this day write a literate paragraph, and spent her twenties claiming to be attending college while, by her report, she was actually traveling with a major personality from the Entertainment Industry. None of us knew the facts, simply trusting her, paying her bills and hoping for better things.

My parents asked to adopt her when she was 12, having raised her. Morgan was spoiled by two elderly people who loved her dearly and overlooked her behavior for most of her young life. Unfortunately, they also failed to correct those problems with her behavior.

Like many exhibitionists, Morgan is also addicted to sensationalism even when she has to invent it herself. Schwarz published this email which appears to be from Morgan.

Melinda was married to Ron Kellett and had an open relationship with him when she was sleeping with both Fund AND Craig Franklin. Craig later married her when he learned she was pregnant assuming Justin was his, but NOW wants Fund to have that blood test because if it turns out Fund really is Justin's father he can sue Melinda for fraud in getting him to marry her in the first place! So as we speak Craig is calling Fund to demand the blood test....damn Karl, the soaps are nothing to this!!! M”

FROM MELINDA - There was never any doubt that Craig was my son's biological father. Craig never raised the issue until he hoped to evade child support. Morgan made these statements because she loves to shock and for money. I can prove Craig paid her to slander me, $70,000 worth. Think of her as a Liar for Hire. Morgan was probably disappointed that Schwarz stiffed her.
It would be praise to say that Craig Franklin is a man of dubious morals. There is no doubt of his moral fabric. After Justin was old enough not to be subjected to the trauma of custody issues I finally demanded a DNA test, which Craig has consistently refused to take. Craig never asked for such a test and admitted paternity in November of 1998, paying child support until Justin was 18. These are facts, documented by the court in Santa Barbara.
I never used the name Madame Karnak. I did not know who the character was since I do not watch much television. If Morgan actually said that she must have been on drugs. Perhaps one of the other one of them should produce the scurrilous articles I supposedly wrote about various men?
Morgan lies. Schwarz, a grifter, used a known liar to buttress his attacks on me. How could it be more perfect? Notice that Schwarz has filed no law suits, despite his posturing.
Morgan and Craig took a trip together in October of 1998. Craig paid her way to New York, London, and Paris, providing spending money and lavish meals. I was in Santa Barbara taking care of my son, Arthur, who was and is severely handicapped from a near fatal motorcycle accident on September 27th, 1997 and a suicide attempt caused by Craig in March of 1998. What kind of creep asks a fragile young man to have lunch with him and spends the whole time telling him that if he has to live with his mother, the only one willing to care for him, that he would be better off dead? Arthur shot himself through the brain. Every day I thank God he did not die.

I would really like to stop wasting my time responding to attacks from Schwarz. I would ignore this if he had only attacked me but I will not tolerate these attacks against my sons. Those were slanders were made on the radio, not in writing. They were completely outrageous and untrue. Both my sons are wonderful men who have consistently done the right thing, worked hard, and harm no one.
Posted by Melinda Pillsbury-Foster at 6:34 PM No comments: